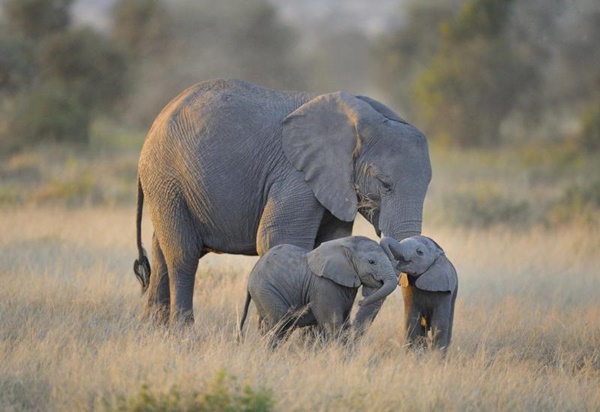 Mothers! They say, because God could not be everywhere, he made mothers. Well, that is true. From giving birth to us, to taking care of us and then to sacrificing a lot of things for the sake of their children, mothers are truly an extraordinary human being. Fathers also have an equal role, but nothing can beat the love mothers carry for their children. A mother is someone who can take the place of anyone and everyone, but no one can take her place, try as much as you want to.

In humans, a mother carries the baby in her womb for about 9 months, before the baby can come into the world, with proper grown body parts. But in the animal kingdom, there are a few exceptions, as there are few Animals with Really Long Gestation Time. These are natural processes and nothing can be done about it.

Among all animals that live on land, elephants top the chart when it comes to the longest gestation period. 24 months, or 2 years is the average pregnancy time that a female elephant carries. A new born elephant can weigh anywhere between 90 to 120 kgs as soon as they are born. The maturity of a baby elephant is attained at the age of 8, but they are physically fully grown only at the age of 20.

These animals are found only in certain parts of East and Central Alps and have a gestation period of about 2 to 3 years. This gestation period can vary based on the environment and altitude they are living in. They can give birth to only one baby at a time.

The minimum gestation period of a shark is 2 years, and the maximum can go up to 3.5 years. The sharks give birth to well-developed off springs, which are less in number, owing to the long gestation periods. The baby, can swim as soon as they are born. There are three species of sharks, and the gestation period varies as per that.

Who doesn’t love dolphins? They are as attractive as they can be, and when they come out of the water, it is a sight to behold. Another interesting fact about them is their long gestation period, which is typically about 17 to 18 months long. Among all the dolphins, the killer whales are known to have the longest gestation period – 18 months. They can give birth to only one baby at a time.

If you have to look at all the pinnipeds: The group of sea lions and seals, the walruses have the longest gestation period, and hence they had to be on the list. A pregnancy period of 16 months, is what these animals have. While compared to other mammals, they have the least reproductive rate, yet the longest gestation period. They can give birth to either a single baby or a twin pair as well. As soon as the baby is born, they have the ability to swim across and can weigh up to 70 kgs.

If there is anything that can live up to the long height of the giraffes, that is the long gestation period that these animals carry along. Yes! The female giraffes have a gestation period of about 13 to 15 months. One more surprising fact about this animal is that it can give birth to the baby in a standing position. As soon as they baby is born, the height is up to 6 feet already. The baby falls out from the sack of the mother, and hence the long height of the baby is justified, because it has to embrace the long fall.

Living in the concrete jungle, you don’t get a chance to peek into the wild and see some beautiful moments of the wildlife enjoying the Mother Nature’s gifts but don’t you feel disheartened as we’ve got you these Inflatable Pictures of Animals Floating on Water.

Surprised to have them on the list? Yes, they look tiny and stout yet the female rhinos are strong enough to have long gestation periods while giving birth to babies. There are about 5 species of Rhinos, and all of them have the same average gestation period. One reason of these animals being extinct could be this long gestation period as well. Among all the 5 species, the white Rhinos have a longer gestation period of 16 months. As soon as the baby is born, they weigh up to 65 kgs. The mother takes care of the baby till 3 years.

Camels are known for surviving in tough environments, but they should also be given credit for the long pregnancy period that they have. They have the baby in their womb for about 310 days. Another species in camels, known as the Dromedary has a gestation period of 15 months. The camels usually deliver one baby at a time, with twins being a rare case. A camel, at birth can weigh up to 40 kgs and the calf can start walking on its own within few minutes of birth.

All living beings have specific characteristics that they possess and evolve with time to survive on this planet and this differentiation is one of it. In scientific terms, this process is called thermoregulation and to know more about it check out these Difference Between the Cold-blooded and Warm Blooded Animals.

These black and white animals are an attractive sight to behold. Another interesting fact about this yet another Animals with Really Long Gestation Time is that the female zebras become fertile enough to start breeding from the age of three. Among zebras, there are three different species and depending on that, their gestation period may also vary. However, the minimum pregnancy period is anywhere between 10-12 months.

While a lot of animals are capable of walking and swimming as soon as they are born, mothers will be mothers, and will always be protective towards their little ones.