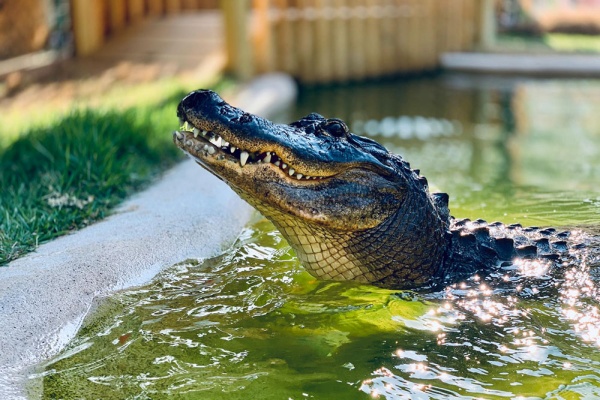 We’re ranking the most dangerous animals on earth based on how many human attacks or deaths per year they cause. We want you to know what features make the animal so dangerous: Is it a venomous poison, a sharp sting or piercing fangs? Here are the 10 most aggressive animals on earth.

Most Aggressive And Dangerous Animals On Earth The moray eel tends to hang out in tropical seas. They have thick, scaleless skin and sharp teeth that enable them to inflict serious wounds on their prey, including humans, when disturbed. People eat Moray eels in some areas of the world, but their flesh can be toxic and cause illness or death if not prepared properly.  Its cousin, the electric eel, discharges 300 to 650 volts when it feels threatened. 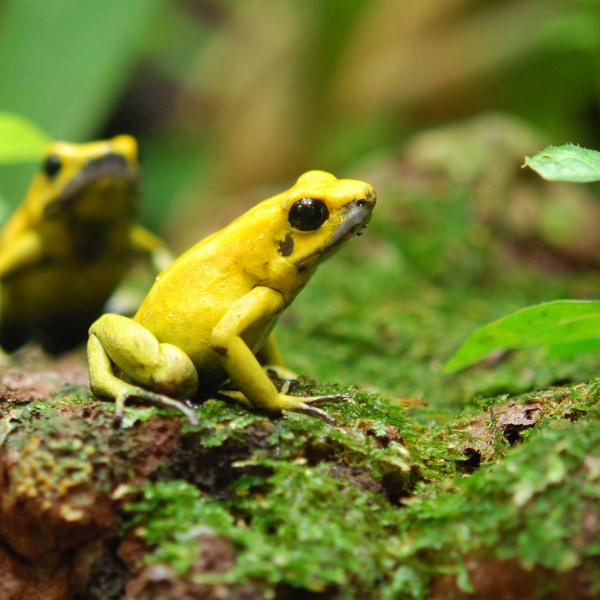 The golden poison frog is considered one of the most toxic animals on Earth. It packs enough venom to kill 10 adults. It’s unclear how many humans have died from an encounter with a poison dart frog. But its venomous characteristics make it one of the world’s deadliest animals. It gets its name from the indigenous people of Colombia who tipped their darts and blowguns with its venom before hunting. For an animal to be considered poisonous, it must be toxic to eat. The golden poison frog keeps its toxins in glands beneath its skin, so any human or animal that takes a bite would be in serious trouble. 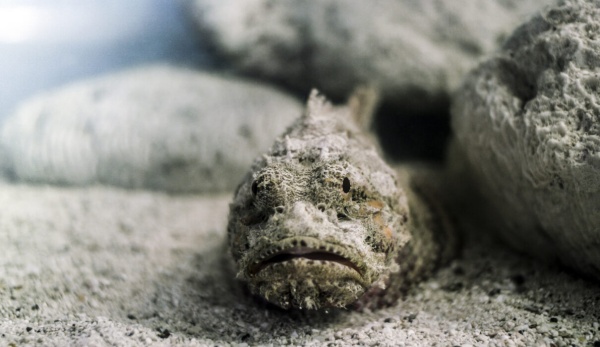 Stonefish are the world’s most venomous fish. They fool their prey (humans included) by camouflage as they blend in with reefs and the bottom of the ocean floor. They have 13 spines along their back, and each spine has a gland that holds venom. If a person steps on or kicks a stonefish, the venom is released, and the person or other aquatic enemies is up for a painful and sometimes fatal ride. 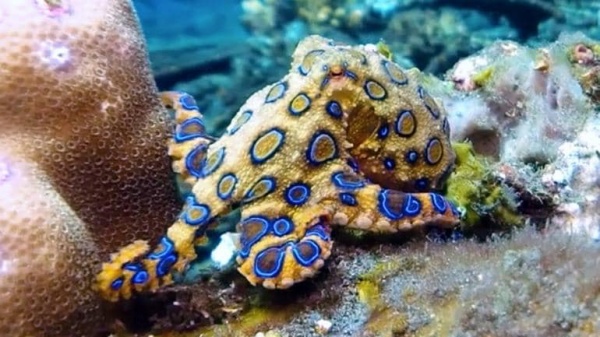 While most octopuses squirt ink as their line of defense, the blue-ringed octopus dispenses a deadly poison enough to kill 26 humans within minutes. If you were to hold it in the palm of your hand it would bite you and inject tetrodotoxin, a deadly toxin also found in pufferfish. It’s unlikely that you’ll encounter these killers as they tend to hide in dark crevices about 165 feet underwater. 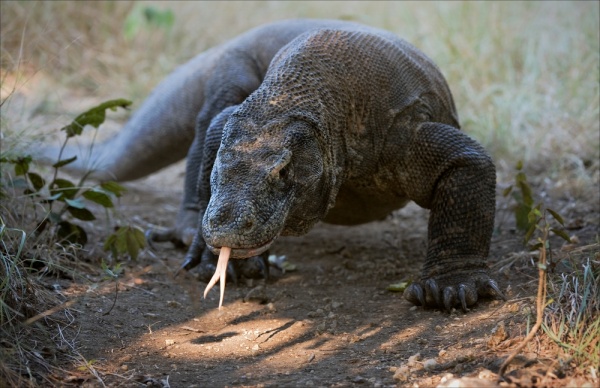 Komodo dragons are the world’s largest lizards, growing 10-feet long and weighing about 150 pounds. In recent years, komodo dragons have become somewhat of a tourist attraction in Indonesia. These prehistoric monsters look as vicious as they are and have killed four people over the past 33 years. The last fatal attack occurred in 2009. Komodo dragons have a powerful bite packed with venom that delivers toxins that inhibit blood clotting. Trauma from the bite, bacteria from the komodo dragon’s mouth and rapid blood loss contribute to their ability to kill prey.

The cone snail may look harmless, but is one of the most dangerous animals on Earth. It has fatal venom that’s not intended to harm humans, but when it does, it starts with paralysis, then induces a coma and eventually leads to death. Deep-sea divers know of the hazards of an innocent-looking cone snail, as their habitats are the tropical and colorful waters of the Red Sea, Caribbean Sea and the Indian Ocean.

Alligators look feisty, yes, but they don’t kill as many humans as you may think. While Florida averages about seven unprovoked alligator attacks per year, there have been only 25 fatal alligator attacks since 1948, according to the Florida Fish and Wildlife Commission. If you see an alligator, don’t feed it. Not only is it illegal, but it teaches them to associate people with food. 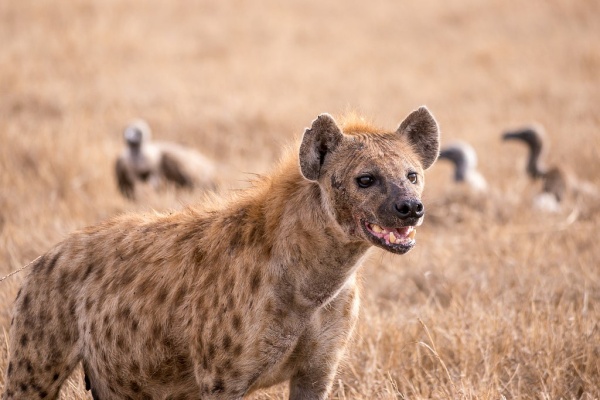 No one wants to encounter a hyena, and they generally avoid humans. But in certain parts of Africa, hyenas also includes in the list of animals with storegest jaw and have been known to attack villages. Hyenas are scavengers known for their high-pitched laugh and dog-like features. They’re vicious mammals that invoke a mixture of fear and aversion in some folks. 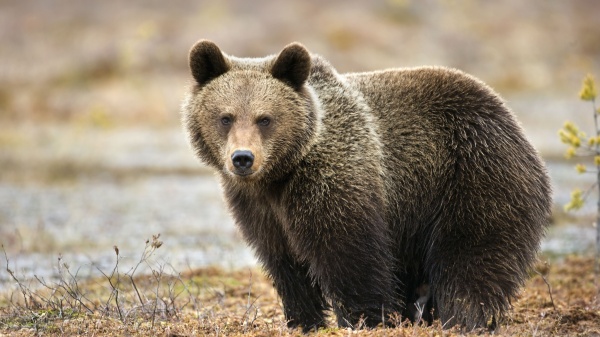 Bears are not as scary as they may seem. In fact, many are skittish and have been compared to giant squirrels. The polar bear is one of the more aggressive bear species, while the black bear and grizzly bear take the crown for most human attacks. Bears get a terrible rep for attacking humans in forests or national parks, which is understandable because we are intruding on their natural habitat. It’s important to keep in mind that bears are surprisingly fast and very curious. That’s the reason they are rated as one of the most most aggressive animals on Earth. 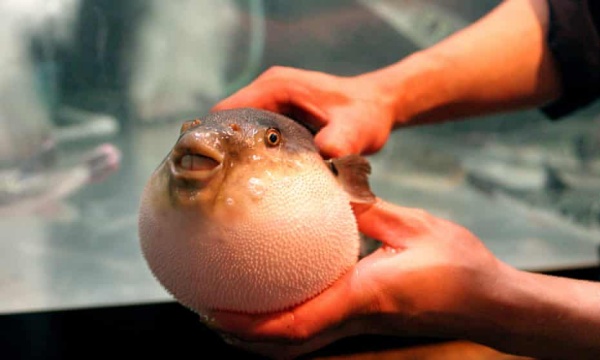 Pufferfish, blowfish and fugu fall under the same category of a fish that puffs up with spikes and stings you. Fugu, a particular kind of pufferfish in Japan contains a toxin more poisonous than cyanide. But in Japan, pufferfish is a delicacy to eat. Most human deaths by pufferfish are due to the fact that its meat was not prepared properly. According to the Japanese Health Ministry, incorrectly prepared fugu is one of the most frequent causes of food poisoning in the country. 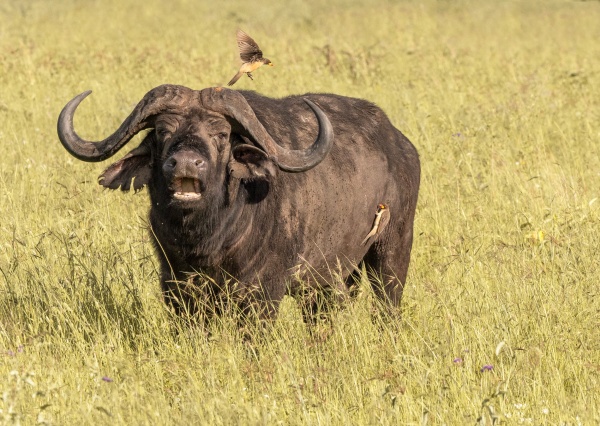 The African Cape Buffalo may have horns that looks like an 18th-century British wig, but that’s what makes them so dangerous. Because of their luxurious horns and being part of the African Big Five, they’re subject to hunters.  Cape Buffalos are called “Black Death” because they’re an aggressive animal when wounded. In the instance of being hunted, the herd turns into a mob and charges at speeds of 35 miles per hour.