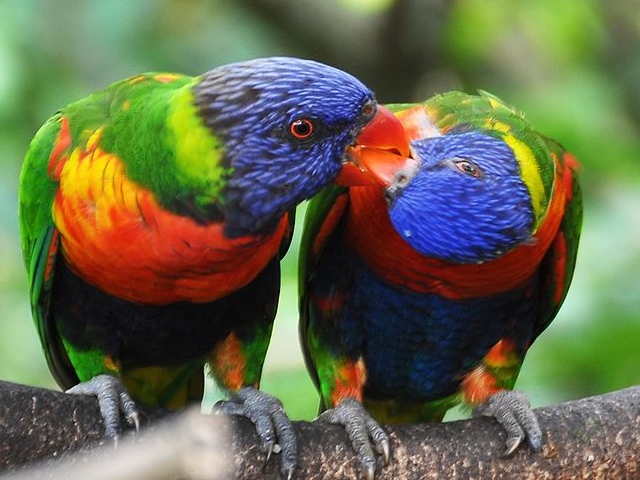 Having a pet is an absolute delight. There is just something special in having a bond with a creature that shows its love in cuddles and hugs. However, it is something different altogether to have a bird as a pet. Especially the exotic birds like one of these most colorful parrot species in the world. 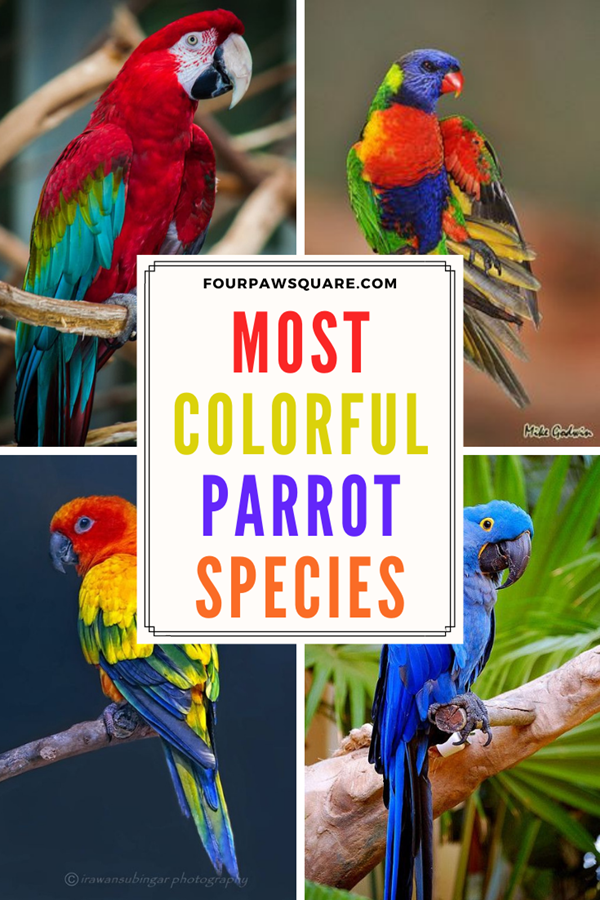 Now, parrots are great and unique. Not to mention they would probably welcome you home with a swear word you might have shouted sometime in their presence. As fun and embarrassing, it sounds to have a parrot for a pet, before you bring them home, you need to know what they would need. And these pretty babies here have as varying needs as their colors.

Most Colorful Parrot Species In The World 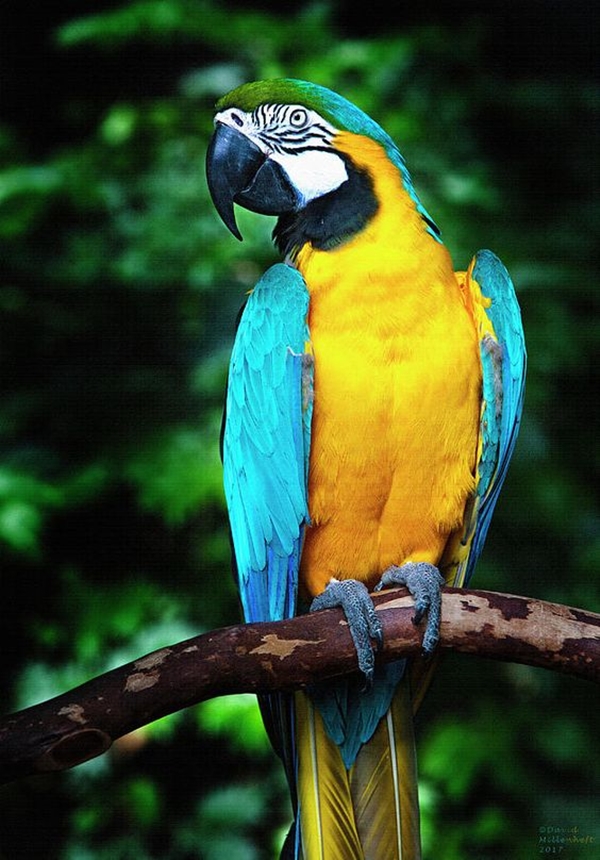 One thing you need to know about these most colorful parrot species in the world is that many of them are high maintenance. This attractive species of Blue and Gold Macaw, a native of South America is no different. These macaws have bright blue plumage and golden or yellow underparts with accents of rich green near their crown. They are quite big and bulky and need a good amount of space to play. This species is extremely intelligent and social, so with patience, you can get them to talk and perform a few tricks easily. And they enjoy tricks! 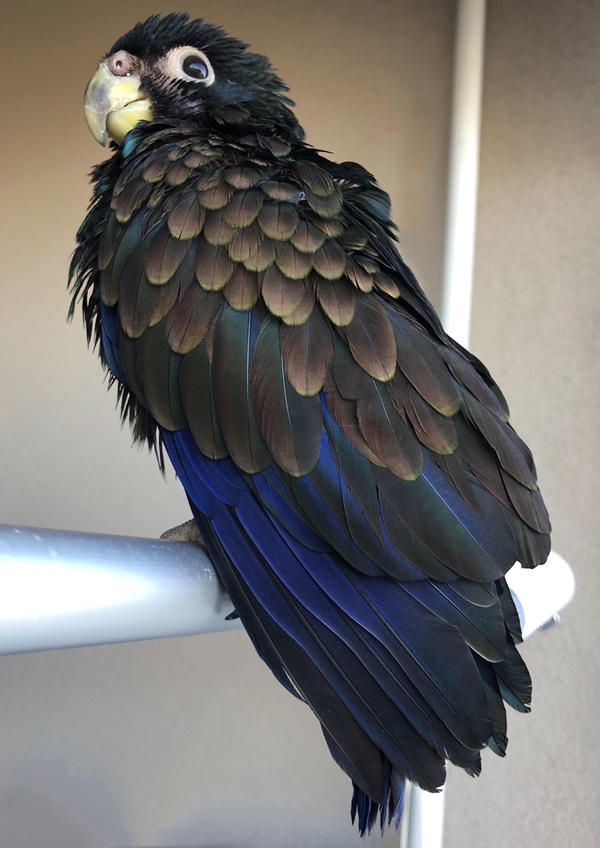 The name might suggest otherwise but actually, these bronze winged parrots are purple in color. The red patches on their bodies give them the bronze effect and hence the name. These parrots are a bit on the smaller side so they make great cuddlers. They are sensitive in nature but also very playful. Unlike most colorful parrot species in the world, these are low maintenance and just demand affection. 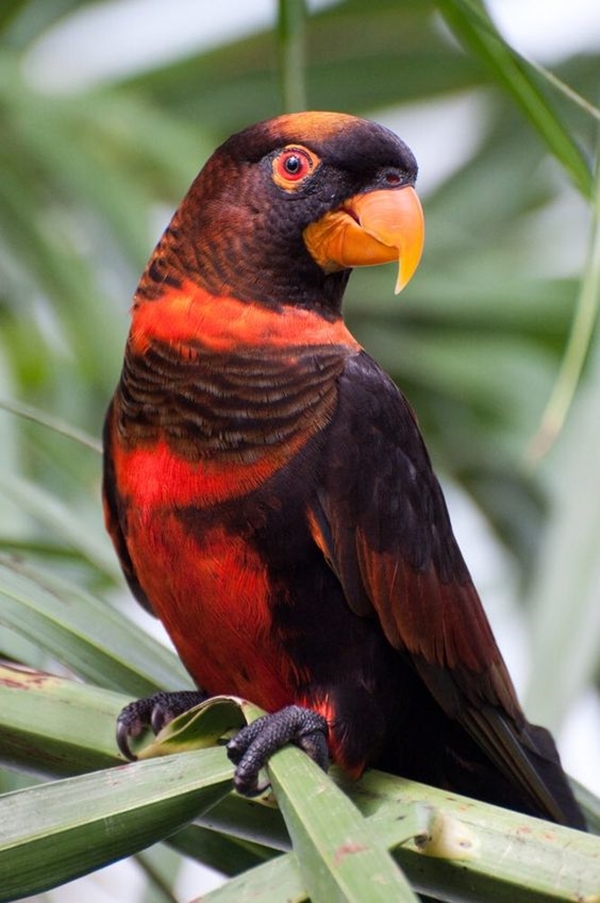 Also known as White-Rumped Lory or Dusky Orange Lory, this is one of the most demanding species of parrots. With their dark brown bodies and a splash of dusky orange, the male and female of this species have a similar appearance. Originated from New Guinea, these duskies are highly intelligent and great mimics. 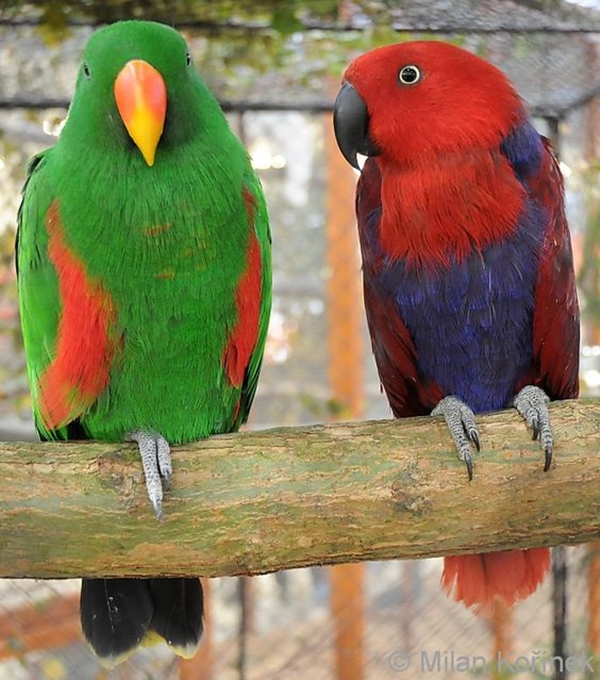 Out of the most colorful parrot species in the world, the Eclectus is the most unique. Why, you ask? Well, because of their sexually dimorphic nature. In other words, the male of this species is pretty similar to the common green parrot we see but has a blue tail and hints of orange. On the other hand, the female birds are completely red with purple plumage. How cool is that! Besides their exotic colors, they are a friendly species and good with children and convey their message by raising their head feathers. 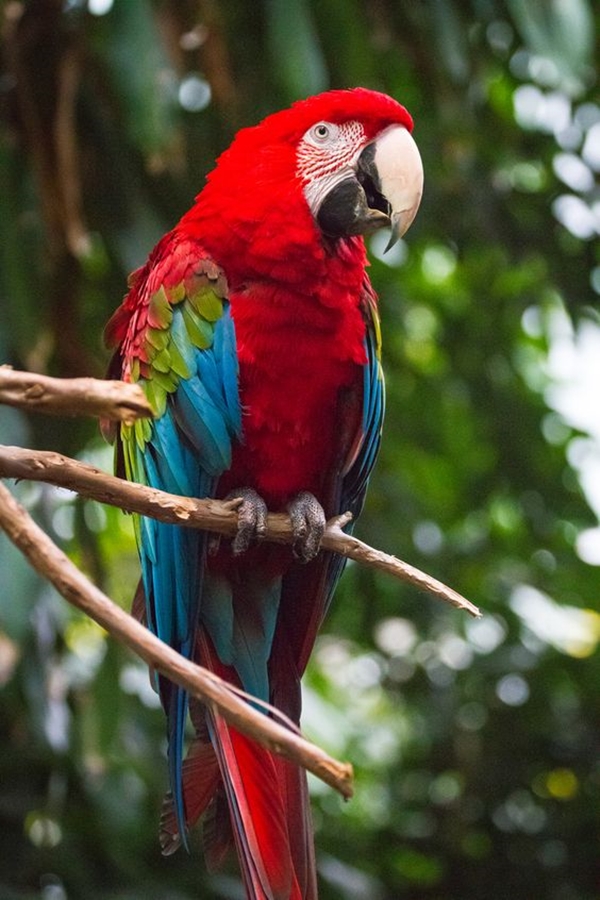 Despite being one of the giants of parrot species, green-winged macaws are gentle and calm birds. Though their beaks can seem intimidating but blame it on the fact of them being macaws. With their striking red bodies and green and blue striped feathers, these parrots require a great amount of attention. So be ready for a high maintenance routine with them.

If there is any species that justifies its name completely then it is the Hyacinth macaws. Not only they are completely covered in bright blue feathers but they are also among the largest parrot species and thus are pretty heavy. Their beak might seem dangerous but they don’t bite. They are very gentle and affectionate birds but beware. If you get on their nerves, they won’t bite but they will show their rage very loudly. Like really loudly! Oh, and since they are big and huge, they can destroy a cage too! So keep them in a calm environment and do give them a good amount of time to socialize. If you can afford their high maintenance, then you wouldn’t regret bringing them home. 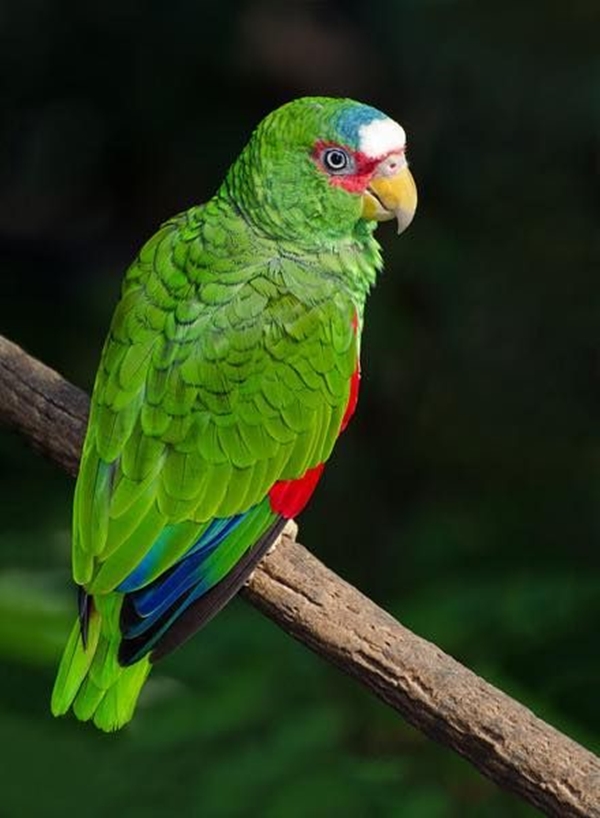 The main feature that distinguishes this parrot species from the regular green parrots is their lilac crowns. With a maroon head and a lilac tint around their necks, they become even more appealing. Lilac-crowned amazons are also known as ‘Finchi’s Amazon.’ These parrots are native to Mexico. They won’t talk much but they will make noise for sure. With their friendly and lively nature, they would make a pretty low maintenance pet. 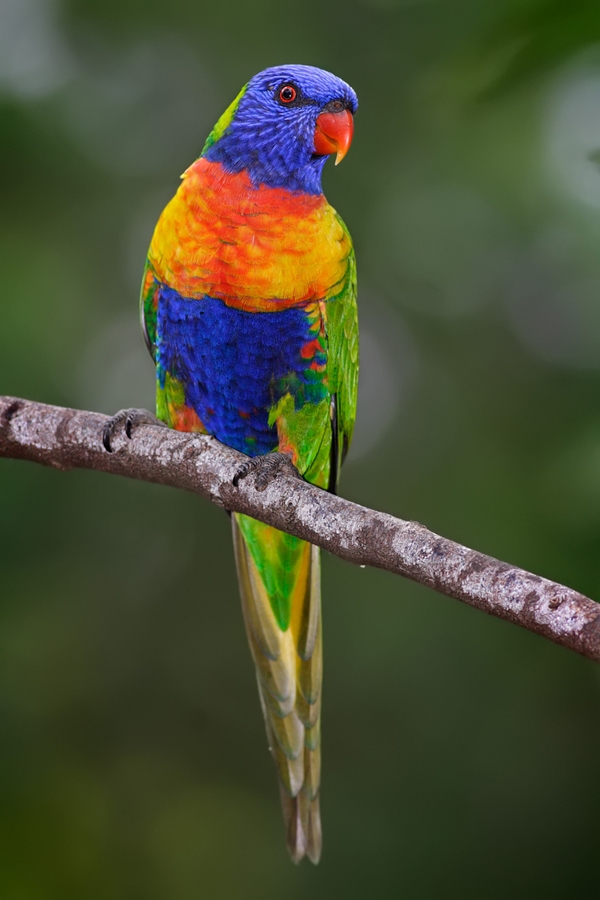 So when we are talking about the most colorful parrot species in the world, Rainbow Lorikeet fits the bill from A to Z. As their name suggests, this species is as colorful as it can get. Covered in different colored feathers from top to bottom, these birds are no shy babies. In fact, they are pretty mischievous and are known for their comical antics. They are low-maintenance but they do require a lot of time to play and talk. 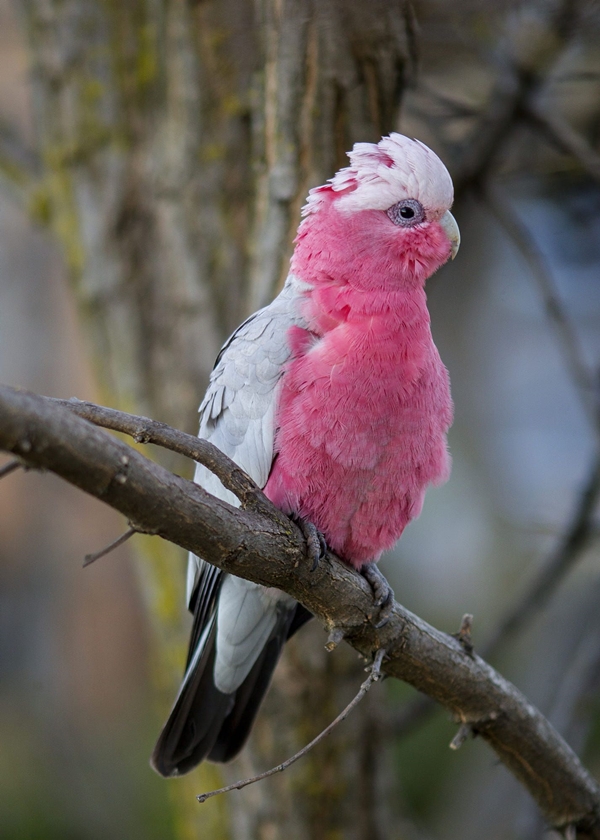 One cannot miss this adorable species. Not when it has that beautiful shade of pink, white and gray going on all over its body. Another famous name for rose-breasted cockatoo is ‘Galah’ and though their color is not as bright as the other most colorful parrot species in the world, they are still very attractive. Not much of cuddlers but they are affectionate and peaceful. 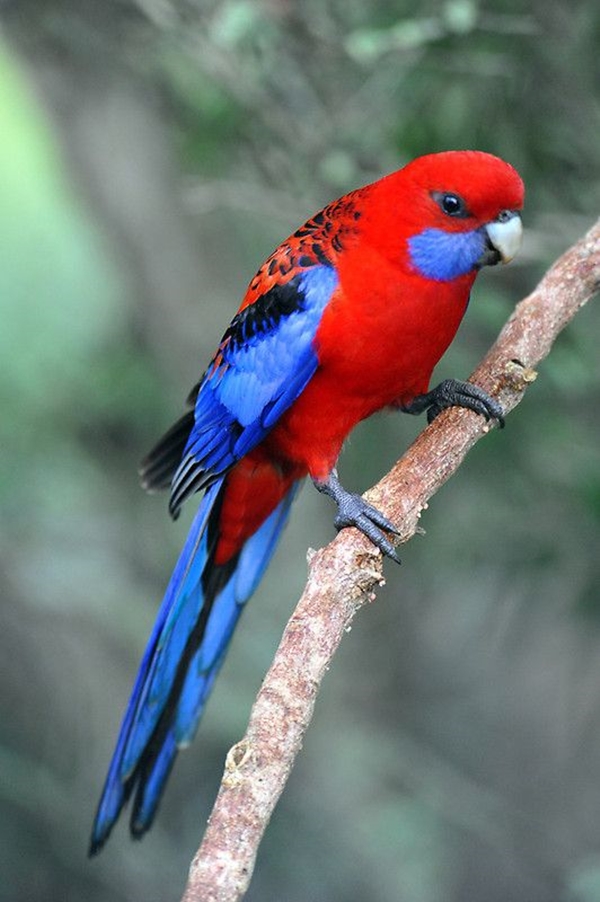 Now this species itself has many different parrot types in the family. The most common one is the parrot with multiple colors and looks like a sparrow. Yes, you read that right. It has a body like a sparrow but do not doubt, it is indeed a parrot. A very low maintenance one at that. They are calm and friendly and would require some hand training, that’s it. 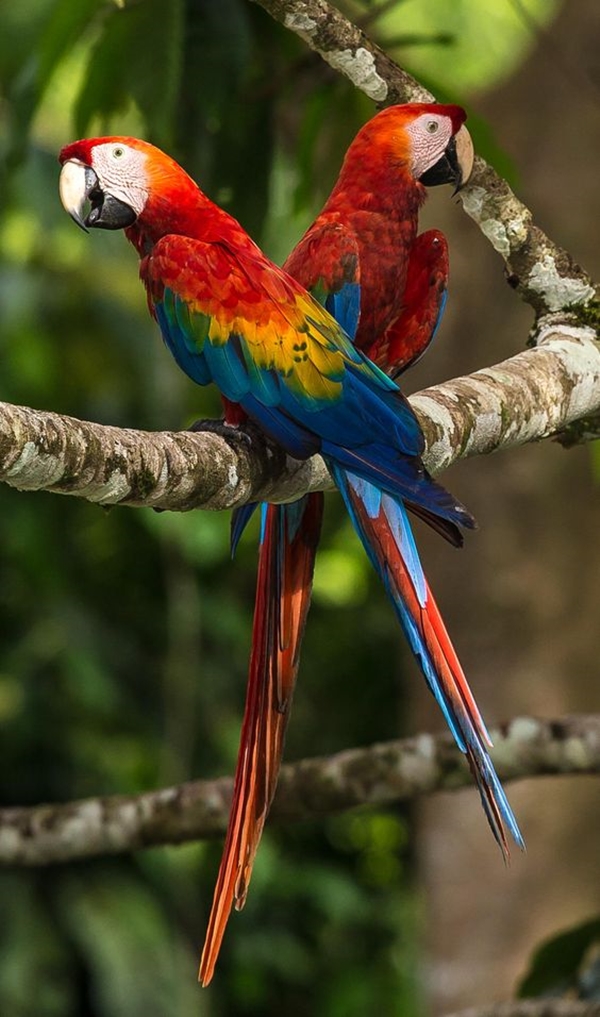 One look at this bird and you would realize why it is considered as one of the most beautiful birds. They have this striking combination of red, yellow, and blue that is just so alluring. They are very smart and friendly. They can pick up words and throw them right back at you with utmost confidence. But as tempting it is to get them for a pet, you must also know that they are pretty loud and really big. So high maintenance and a great amount of time for their training are the terms they come with. 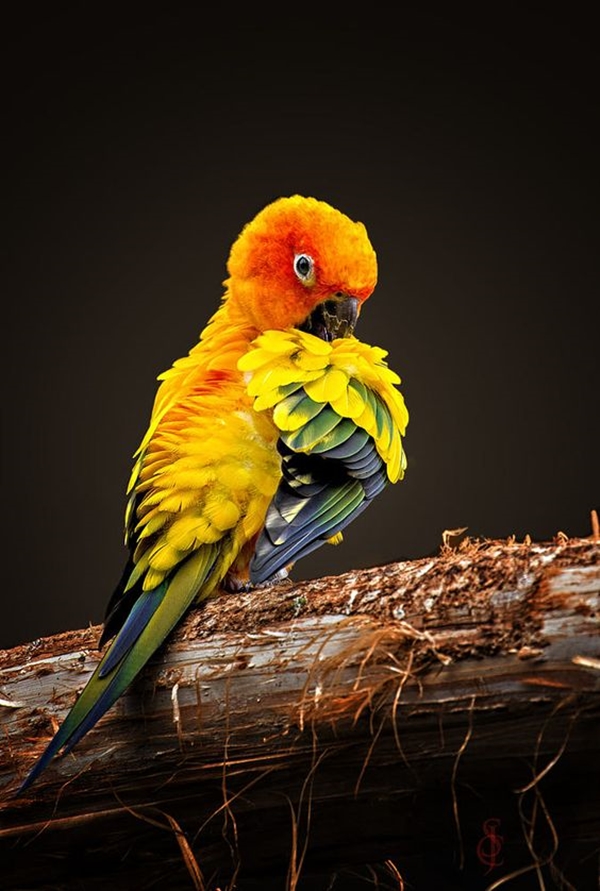 Sun Parakeet is another name for the sun conure species. Though they have bright yellow plumage, you can see the whole rainbow colors on its body. They are extremely appealing and really cuddly. However, they do bite! So make sure you don’t leave them alone with children. They love to play and socialize for long hours but their mood can swing in a jiffy. They wouldn’t talk but they have strong lungs, so you can hear them from miles away!

Not just these parrots are incredibly beautiful but they are also smart, social, energetic, and complete chatterbox that would keep you entertained all day long. But these most colorful parrot species in the world also require a very dedicated caretaker. So when you feel like you can read their feathers (because that’s how you keep an eye on their health!) go ahead and bring yourself a colorful tattletale.