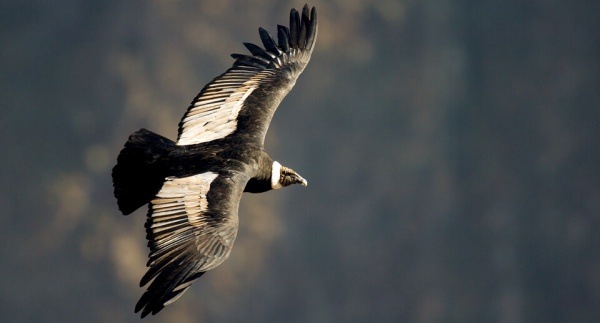 Birds are marvelous creatures and really good at flying. Some birds can actually fly much higher than our imagination (usually at altitudes of 30.000 to 40,000 feet). On the other hand, some birds like Common Swift spend ten months of a year in flight. Today in this post, we’re presenting the list of top 10 highest-flying birds around the world that will surely enhance your general knowledge. 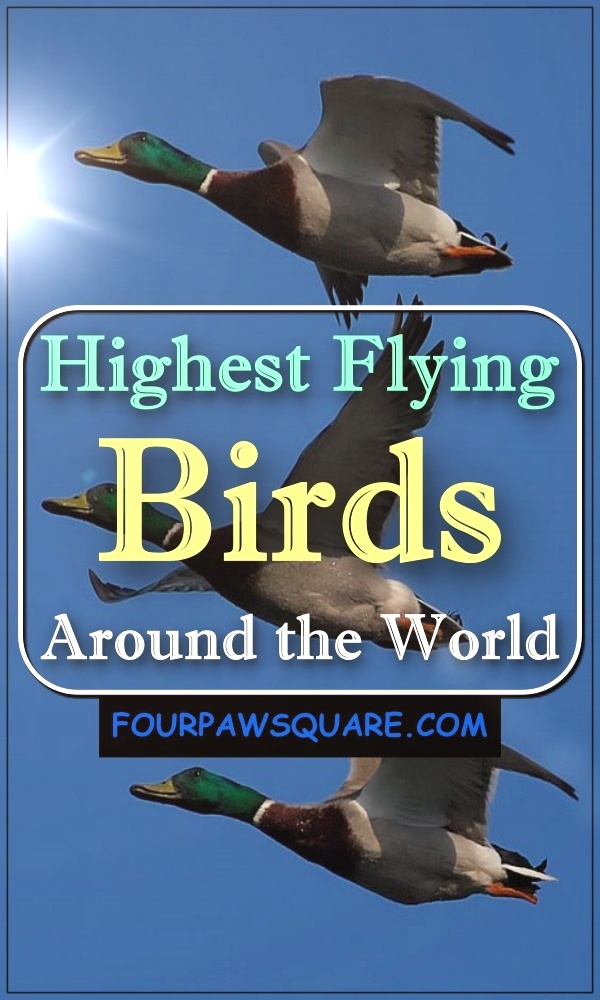 It would be really interesting for you to know that Charles Darwin did extensive research on pigeons and that’s when he found out and announced that there were a lot of differences even amongst the breeds of pigeons. Charles Darwin was very anxious to understand these – and he did a lot of testing and experimenting on these birds. That was when he finally divided the Types Of Pigeon Breeds You Must Know into two major categories – domestic ones and fancy pigeons that cannot be domesticated.

Flying high like a bird is a dream of every human. Of course, why not? We have airplanes to fly high in the sky. If you‘re excited to know which birds can easily reach to the much higher altitude, read below –

Highest Flying Birds Around the World 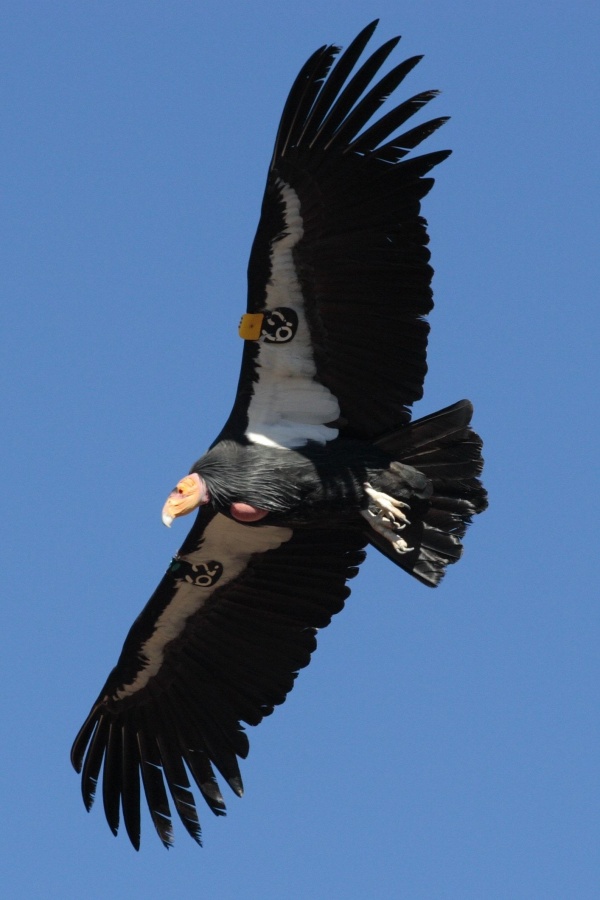 The Andean Condor is considered as the largest flying bird in the world, weighing up to 15 kg in weight. These birds have a maximum wingspan of up to 10 feet 6 inches and can fly high up to 21.300 feet. Andean Condors are scavengers that primarily feed on dead, have excellent eyesight and could spot dead flesh easily while gliding high in the sky. These birds are worldwide popular for their sharp hooked beak and powerful claws. 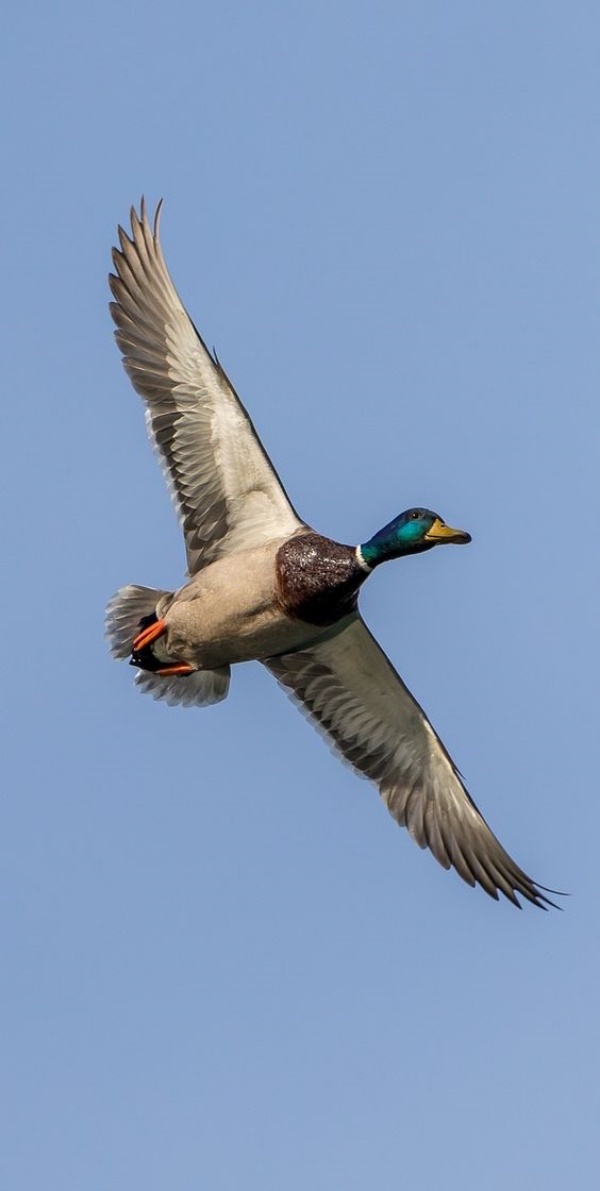 The mallard, a migratory wild duck is found mostly in North America and Europe but migrates to Asian countries as well such as – India during winter time. These birds usually travel at an altitude of 1000-4000 feet and can reach a height of up to 21,000 feet. Mallard birds are praised for their iridescent-green head and bright yellow bill. Before the start of the winter season, they prefer migrating to south countries. 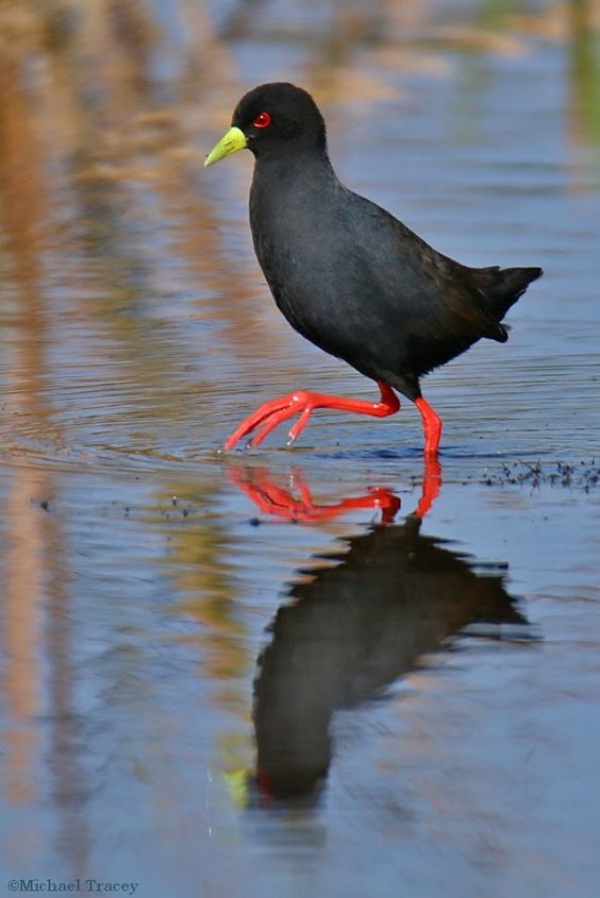 These birds are not only one of the highest-flying birds around the world, but also the highest nesting birds in the high mountains of Europe, Northern Africa, and Asia. Alpine chough builds a nest at an altitude of 21300 feet and the eggs of these birds are well adapted to tolerate the lack of oxygen in the thin atmosphere at high altitudes. They feed mostly on fruits and not too long grazed grassland. 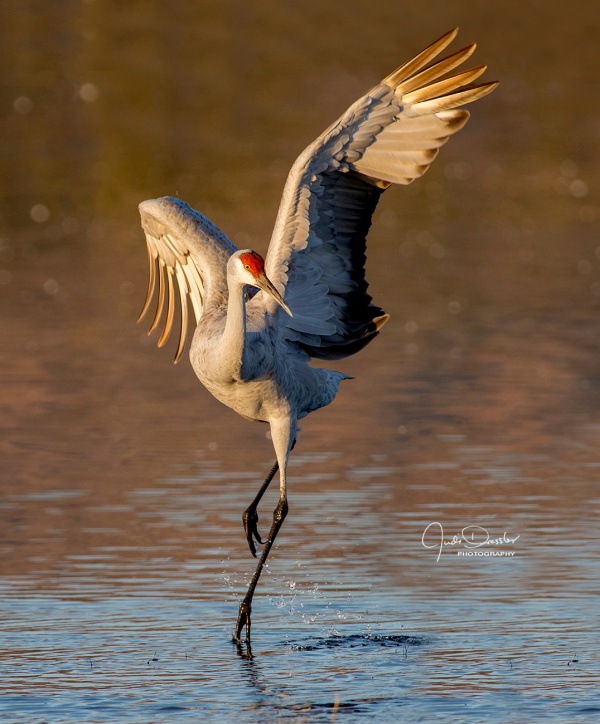 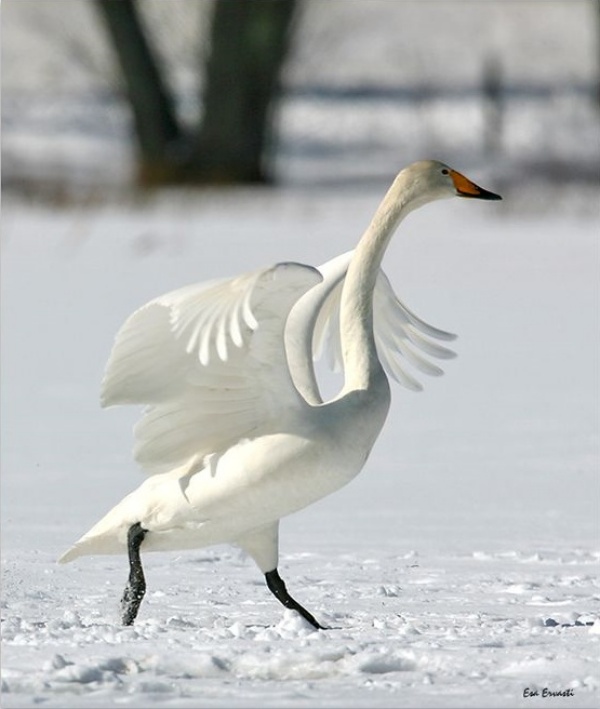 Whooper Swans are one of the strongest contenders for the title of the highest-flying birds in the world that are popular for their long neck and yellow-black bill. These birds mostly nest near flooded grasslands, lakes, wetlands and ponds of Southern Eurasia. These birds usually fly in ‘V’ shaped flock formation at altitudes of around 8,000 feet during migration but can reach a maximum height of 27000 feet.

Here we have some information of What To Feed Newborn Baby Birds? 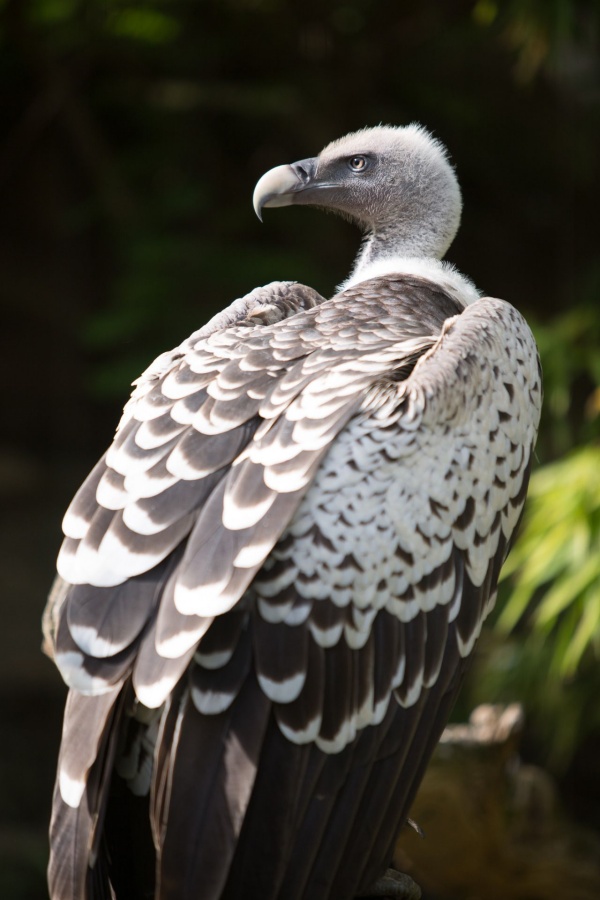 These vultures are found in the Sahel region of Central Africa. Their body is adapted to very high altitudes where oxygen levels are low. The reason behind their ability to fly at such great altitudes is due to the fact that their blood contains a special type of hemoglobin that absorbs oxygen more effectively. These birds have sharp eyesight and can fly high up to 37,100 feet. 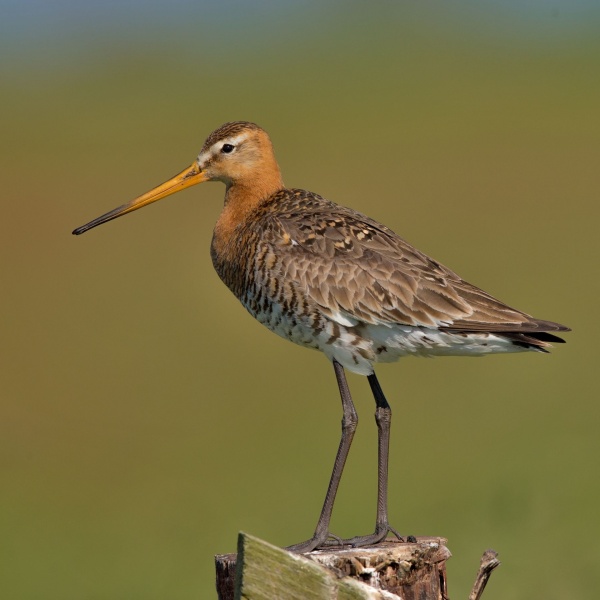 The bar-tailed godwit is a large wandering bird with a unique long bill. These birds breed in the tundra and Arctic coasts of Eurasia and spend their winter months in the tropical habitat of Australia, New Zealand, and Asia. Surprisingly, these amazing birds can cover around 11,000 kilometers in just 7-8 days without any rest. They are usually 14-16 inches tall with a wingspan of 31 inches. 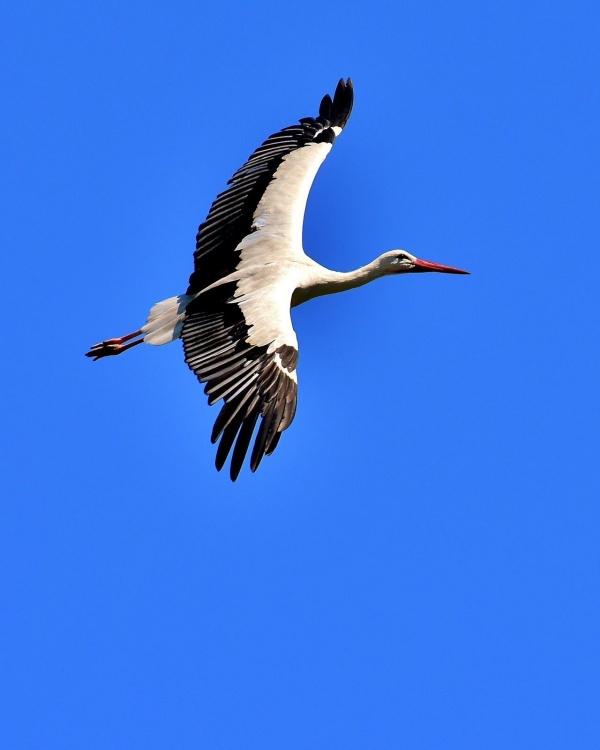 The White Stork is also categorized among highest-flying birds around the world that can reach a height of up to 16,000 feet. Their long neck measuring up to 45 inches gives them a unique appearance. They are strong migrant birds and enjoy spending the winter season in tropical Africa. The White Stocks have a wingspan of up to 2.3 meters which allows them to soar on warm air currents without flapping their wings.

Here we are discussing Bird with a long beak and we are sure you’ll love reading about it, as these birds are not something that we get to see each day. Moreover, the fun fact is, some of them even have colorful beaks! 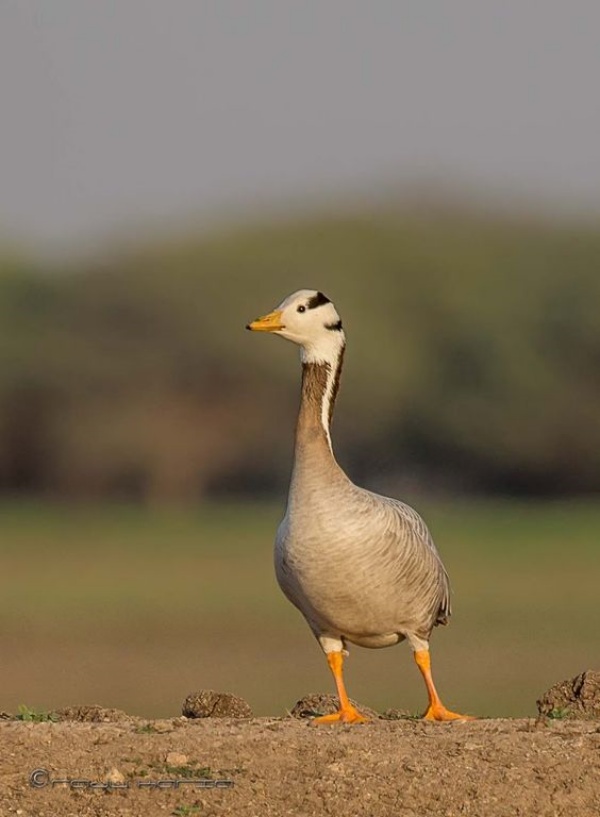 These birds live in high altitude lakes of Central Asia and can reach a maximum height of up to 29,000 feet. Their higher lung capacity enables them to fly over the Himalayan peaks where air pressure is quite low. The reports proved sightings of these birds above Mount Makalu and even Mount Everest, the highest mountain on Earth at height of 8,481 meters. Please note – these birds can fly 1,000 miles in a single day when migrating. 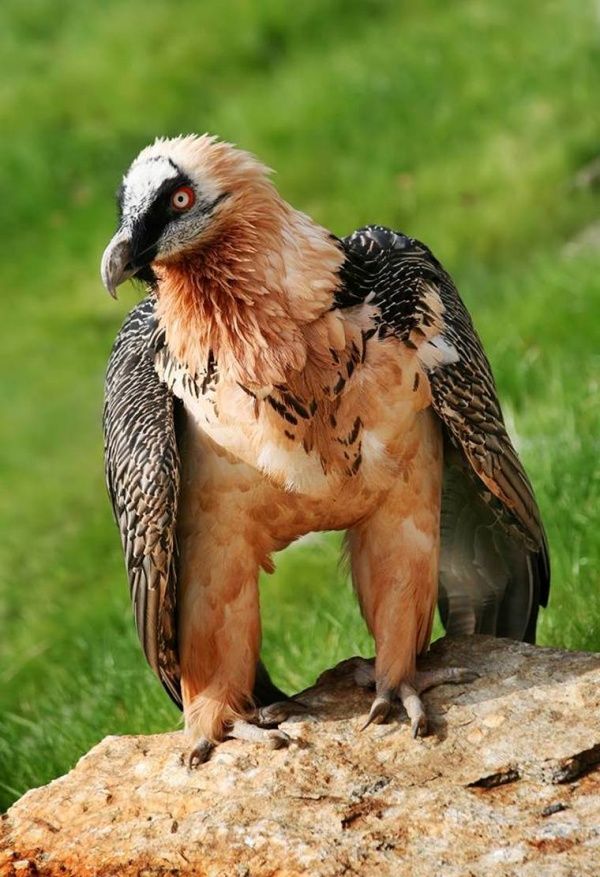 The Bearded Vultures are among large species of vulture that inhabit in mountainous areas of Southern Europe, usually altitudes of up to 24,000 feet. They have a wingspan of 2.5-2.7 meters, giving them the power to soar high above the mountainous areas. If a bearded vulture founds a big bone while flying, it would easily break the bone into smaller pieces by dropping the bone down from a height on the hard rocks.

If you are an admirer of the animal kingdom, you might have seen them move their heads while they walk. However, has ever the question Why Birds Move Their Neck While Walking crossed your mind? If yes, we have an answer to that question and a few more questions regarding birds.

Friends! Next time you get on a flight, be sure to think about these highest-flying birds around the world who can reach such great heights because of their natural adaptations. However, the fact is that due to climate change and hazardous chemicals present in the air most of the bird species have become extinct. So, it’s high time to realize the value of such species in our life and we must take valuable steps against climate change.