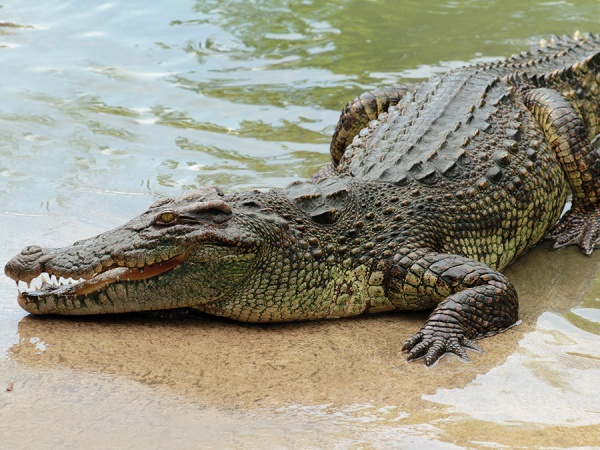 In real, saltwater crocodiles can give anyone nightmares because they are considered as the biggest crocodiles on the planet and they are in a habit of eating just any animal that gets near to them, even people…yup! 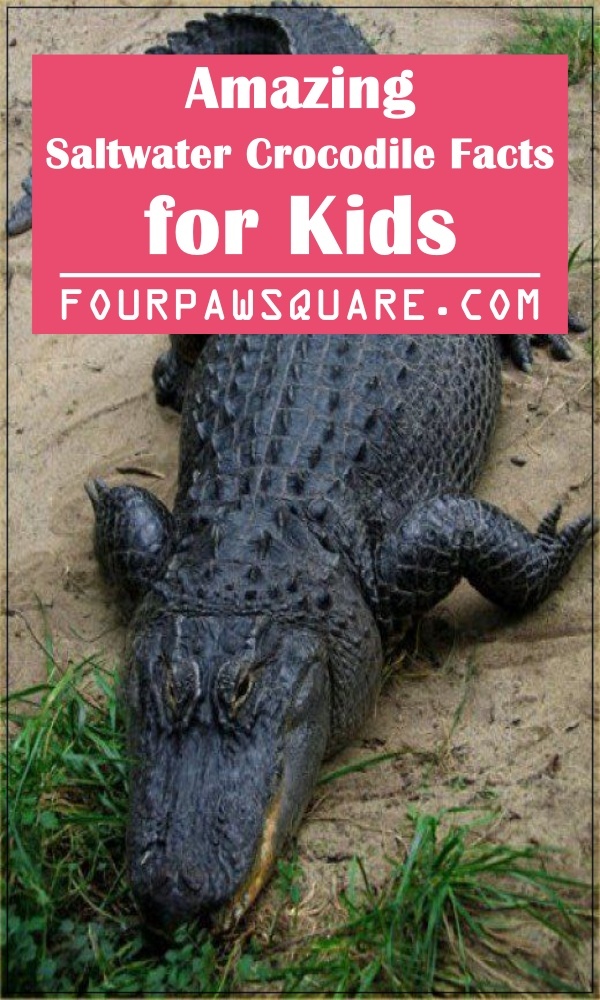 Little kids! Honestly tell us – when you think of a crocodile, the thought of a scary and mean animal usually comes to your mind, isn’t it? This is because crocodiles are known for their aggressive behavior and strong jaws. Today in this post, we present some amazing saltwater crocodile facts for kids. Don’t miss this opportunity to learn where they live, how much they can weigh, what makes them good hunters and many more. We hope you will enjoy discovering a variety of interesting information about crocodiles and have fun. Check – 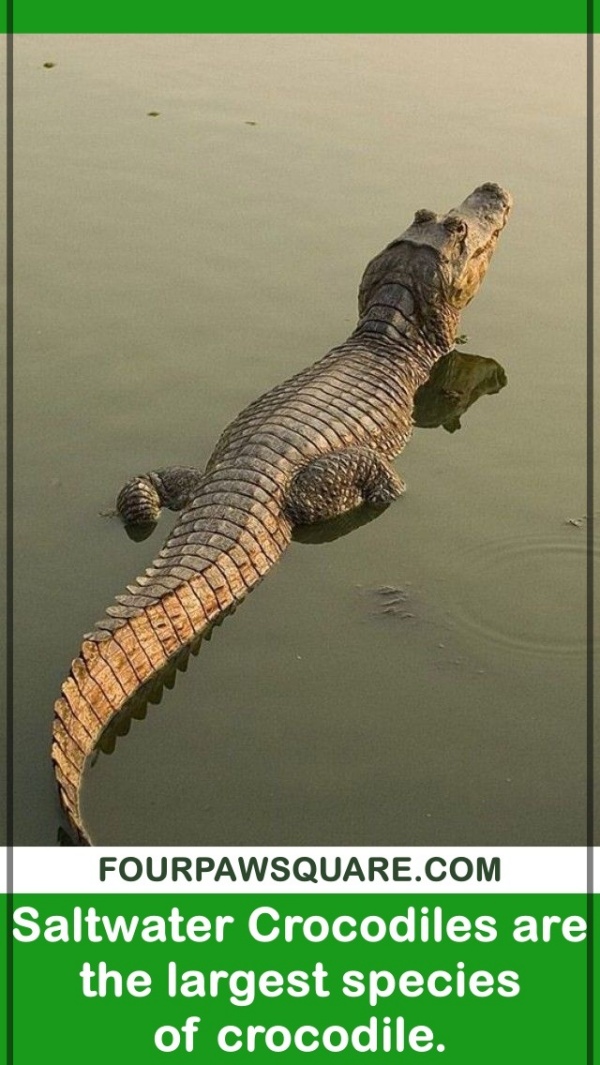 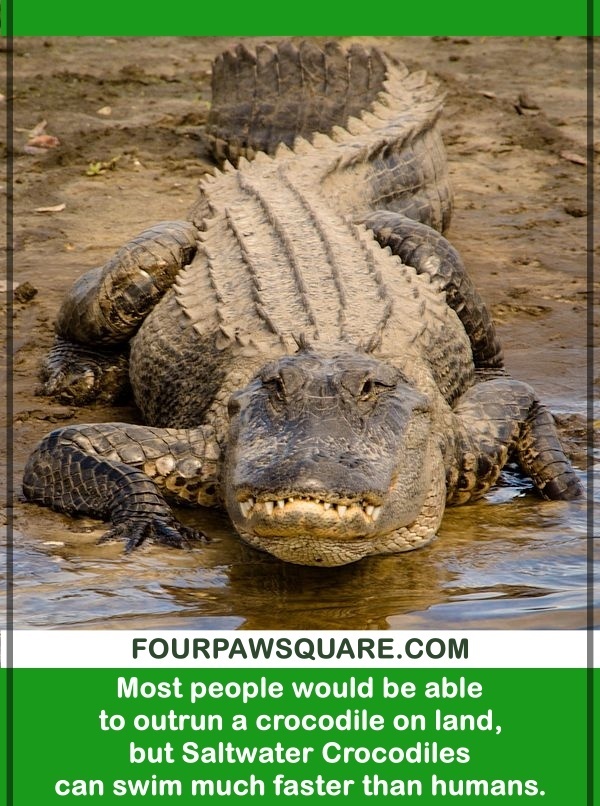 1. Saltwater crocodiles are highly found in the United States. Because of their name, you may think that the only place they live is in salty water, but the fact is crocodiles can also be found in lakes, marshes, coastal water, and swamps – all the areas where a river flows into the sea.

2. Saltwater crocodiles are clever. Yup, they are good at taking advantage of other animal’s hard work and they will steal food from other predators.

3. Crocodiles are large reptiles. This means they are cold-blooded and their body temperature changes to match the temperature around them. The fact that will interest you the most is – crocodiles are called ‘living fossils’ because they are living on the planet earth since the time of the dinosaurs. 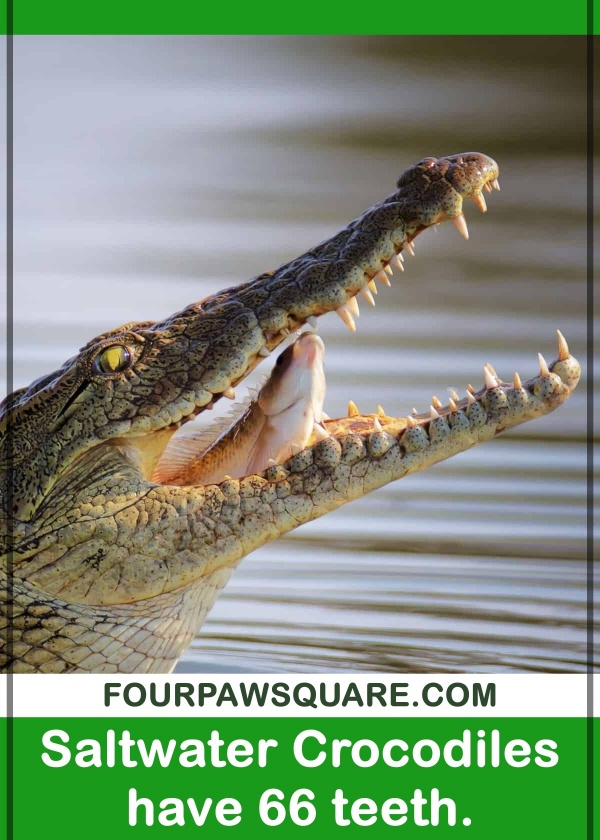 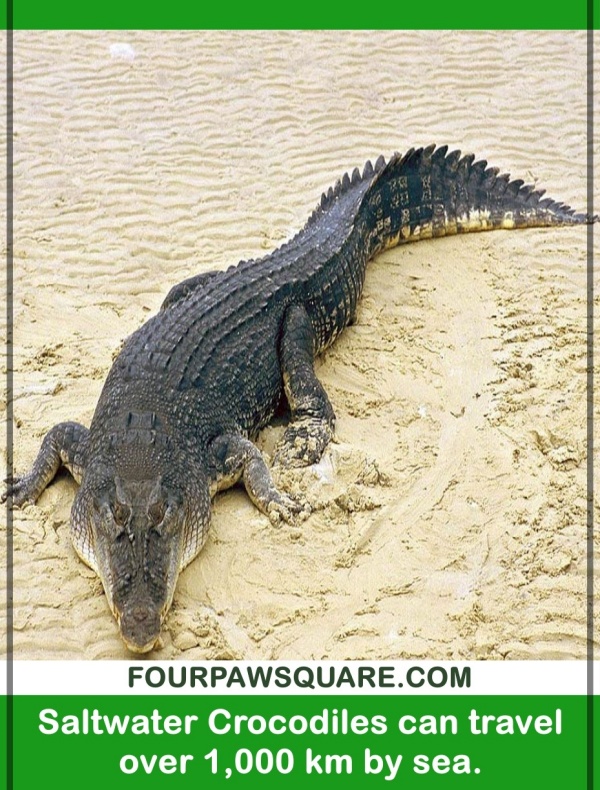 4. Saltwater crocodiles live usually up to 70-100 years and almost 99% of their babies will be eaten by them in the first year of their life by large fish.

5. Crocodiles are ambush hunters. The amazing saltwater crocodile fact for kids to note here is that – with their sharp teeth, swimming abilities, hunting art and strong jaws they are considered excellent hunters and predators because they wait for their prey to come close to them and then they rush to attack.

6. Saltwater Crocodiles live in tropical climates and they eat food that is found in such regions as – frogs, birds, reptiles, fish and other small animals. They also eat animals like – cattle, dogs, and buffalo. 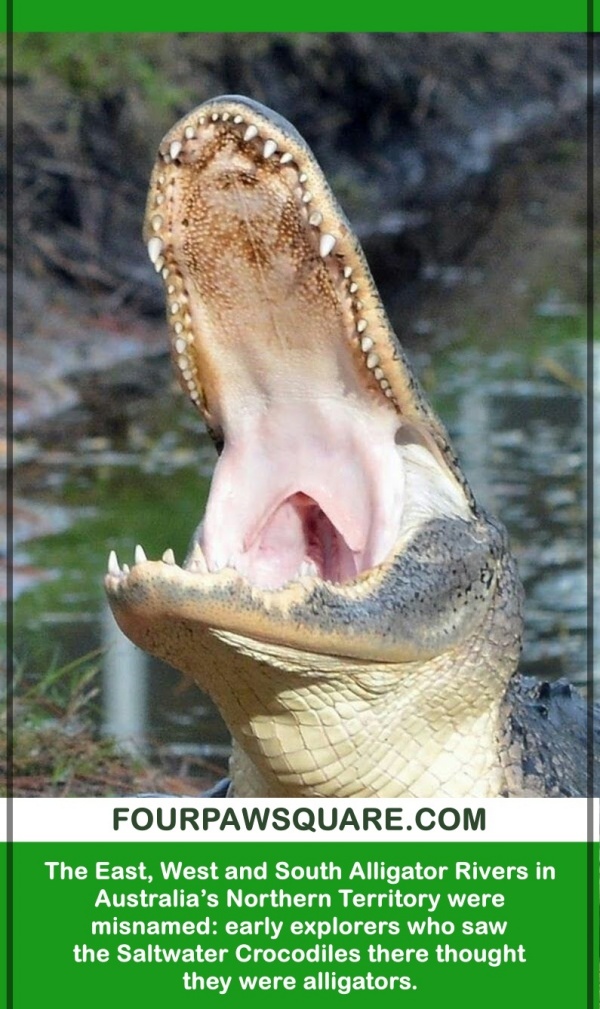 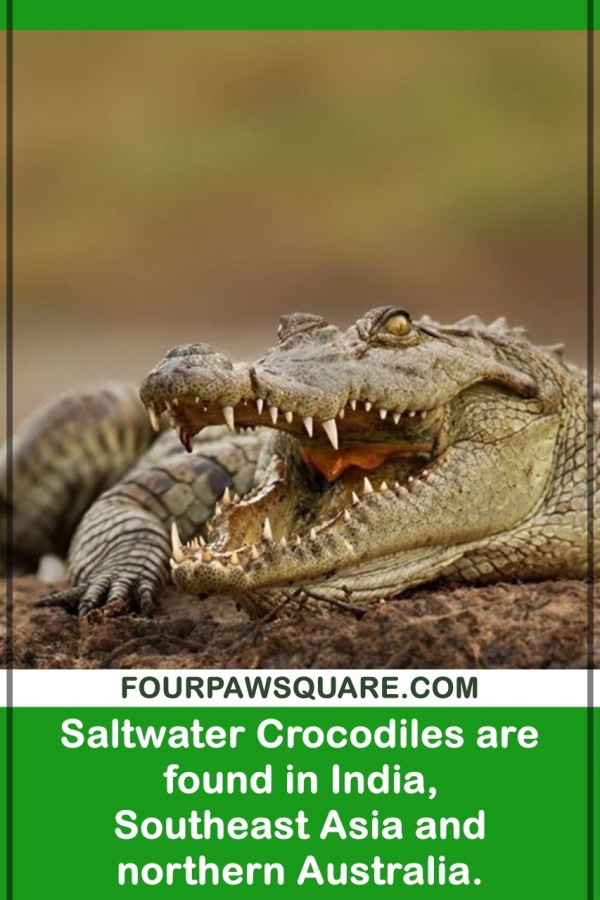 7. Crocodiles have a good night vision and a strong sense of smell so that they can easily find animals in the dark and smell them from miles away with their senses.

Here is some Easy To Remember Hairless Mole Rat Facts.

8. Salty water Crocodile’s skin is covered with scales, lay eggs, and their body temperatures are dependent on outside conditions. Their closest relatives are dinosaurs and birds.

9. Crocodiles are good mothers. Little kids! Just like our mothers take care of us, crocodiles have also proved to be the best mother of reptile species. The most amazing saltwater crocodile fact for kids is that crocodile mothers are very protective over their nest. 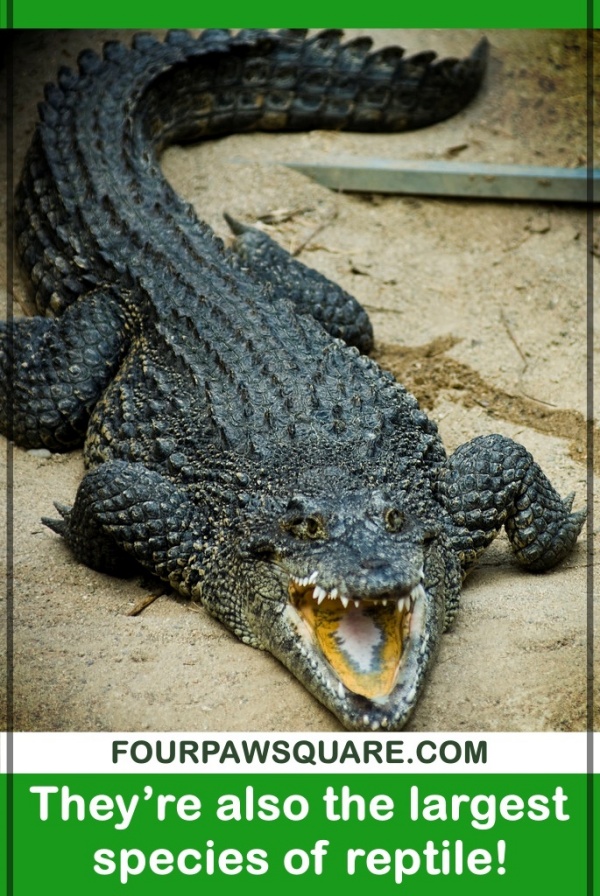 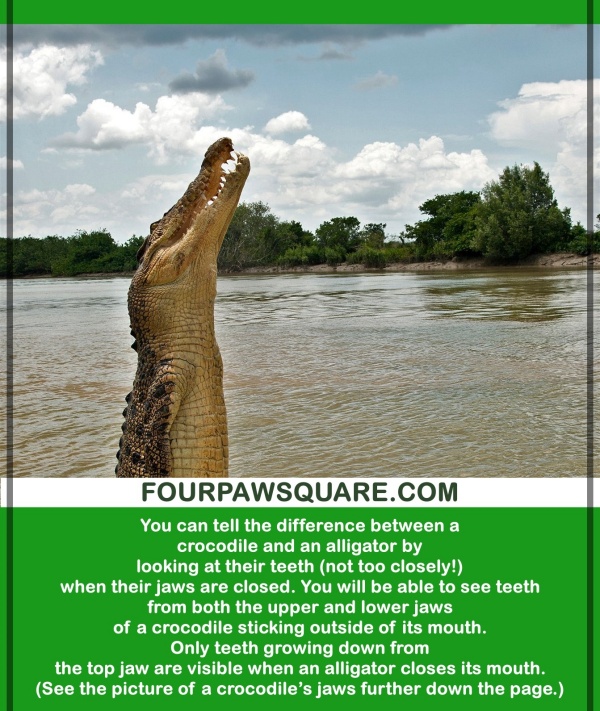 10. Crocodiles vary in size. The world’s largest crocodile species is Saltwater Crocodile. Luckily, they can reach 13-18 feet in length and weigh up to 2200 pounds.

11. Crocodiles are meat-eaters. They have big and sharp 24 teeth set which are used for killing birds or animals as their prey. The animals eaten by them are – birds, mammals, and small crocodiles.

12. A saltwater crocodile can stay alive for a long time without eating. When they will feel hungry – they will catch birds, fish or other grazing animals. These crocodiles can eat a monkey or a shark in one feeding. 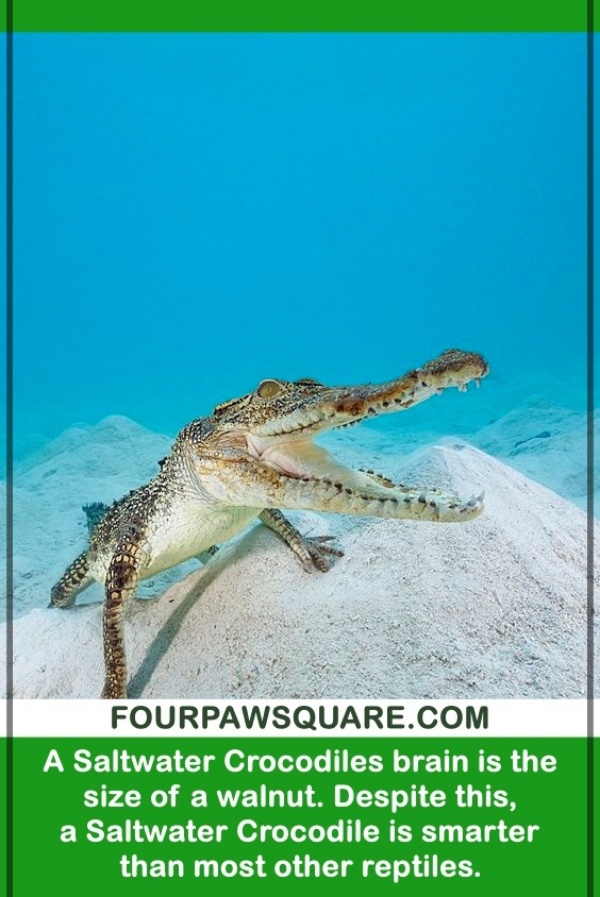 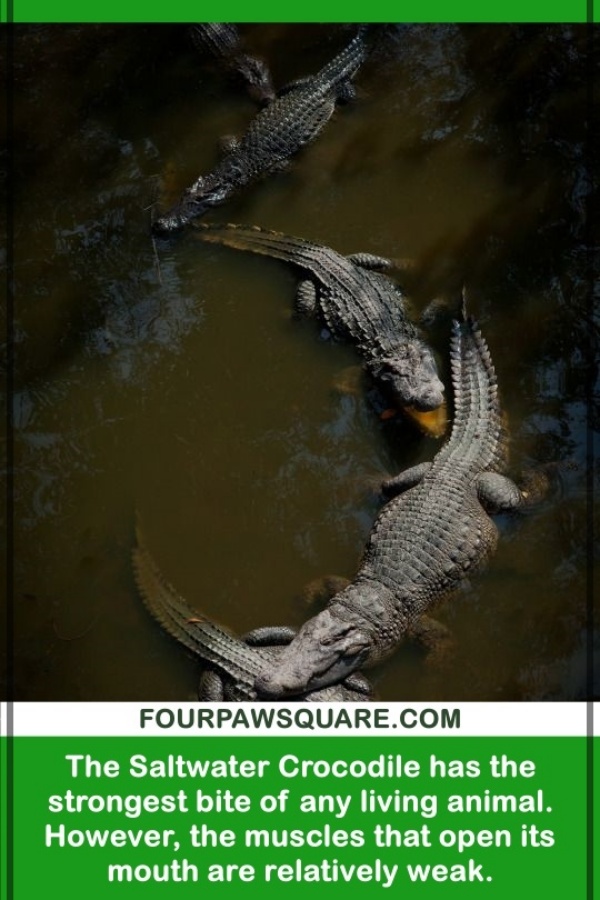 13. It’s scientifically proven that crocodiles really sleep with one eye open. Yes, Australian saltwater crocodiles are known for shutting down only one half of their brain at a time, keeping the other half alert from danger.

14. Young sweethearts! You’ll be amazed by this other interesting saltwater crocodile fact for kids. Crocodiles are fantastic swimmers. They can travel long distances by sea and can swim at 20 miles per hour.

15. Their bite is one of the strongest bites in the animal world. The muscles inducing closing of the jaw are much stronger than muscles which open the jaw hard. 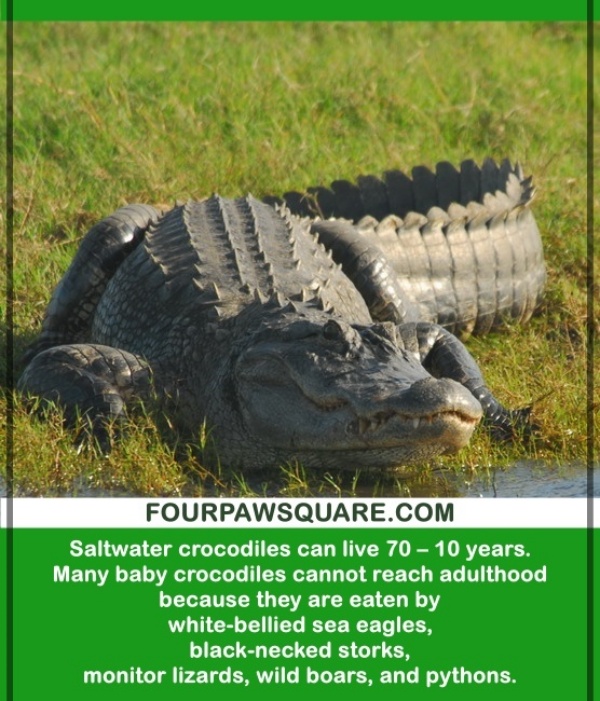 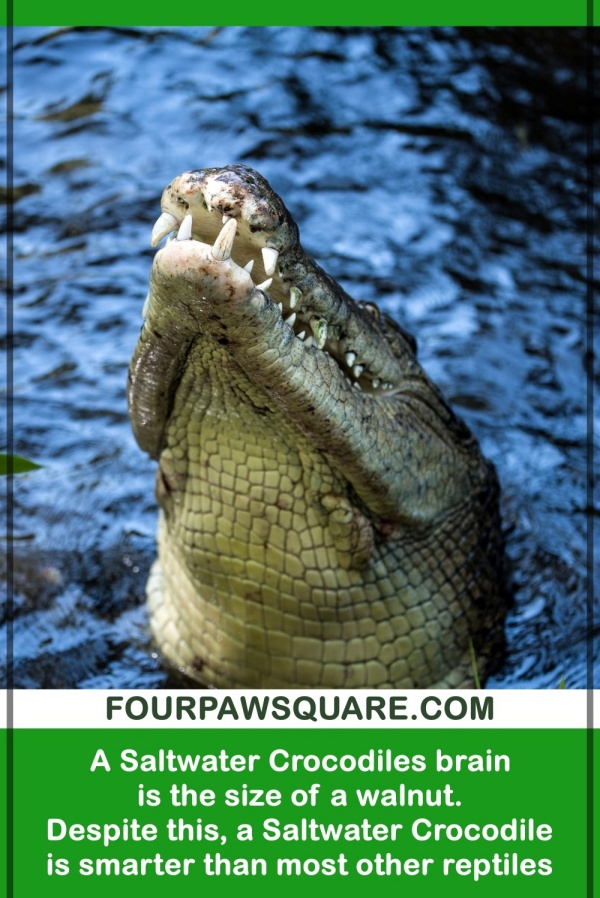 16. Crocodiles are Light Sleepers. Yes, they have excellent hearing power and are always alert. I don’t know this may scare you – they can also sleep with their mouth open.

17. Salty water crocodiles even don’t chew their food. They tear apart flesh and swallow large chunks of meat or bones of other animals. They can even swallow stones to ensure that the grinding system of their stomach is strong.

18. Saltwater crocodiles are very aggressive. They are dangerous to both humans and other animals. Please note – they can move very fast in the water and on land to kill a person, but this doesn’t happen quite often.

19. Crocodiles are very social animals. Isn’t this, sounds interesting? When a young crocodile is about to hatch from its egg, it makes a chirping sound to alert the mother. And whenever some threat is there, crocodiles will give a hissing sound as a signal.

20. Saltwater crocodiles reproduce during the wet season. Crocodiles release heat through their mouths rather than through sweat glands. There is a complex mating ritual which includes rubbing their heads and bodies together before they mate in the water.

One last point on crocodiles kids – crocodiles are natural predators, so staying away from them is the best way to save our precious life. We hope you enjoy reading our post and increasing your knowledge of amazing saltwater crocodile facts for kids. Interestingly, crocodile represents a status symbol for wealthy people.